The Zero Down Loan is Back for Minnesota First Time Home Buyers!

Tough to save money in this day and age, isn’t it?  Now, try to buy a house, save money and deal with life.  Goodness, we've had many people plan weddings and start new jobs – that must be a saving nightmare.

Save no more … well, at least for the down payment!

MN Housing has introduced the Affordable Advantage program.  This is a great alternative to the very popular FHA loan.  Currently, FHA is the main loan people are using in conjunction with their first time programs so all they need is 3.5% down.  You can do conventional financing with 3% down, but the monthly mortgage insurance is quite high.

Enough talking about zero down, just give us the facts Ma’am!

• No down payment
• No  monthly mortgage insurance
• Credit score of 680 or higher
• Seller can pay up to 3% of the sale price toward your closing costs
• $83900 is the max household income for 1-4 people
• Single family home, townhome or condo
• You need to be a first time buyer and attend the Homestretch class
• You will need $1000 of your own money into the deal, no gifts for this

how me the numbers you say!  Look at the difference below in out-of-pocket expenses and payment. 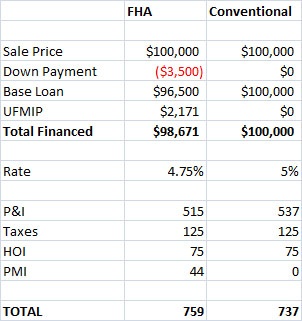 They expect to remove about 355 non-diseased but generally declining ashes over two months in wards 6 and 7 on the East Side. All the trees are on public property. Right now, the concentration will be on boulevard tries and in the future it may move to parks.

The work is being funded through a $722,600 state grant aimed at helping cities cope with invasive emerald ash borers. The insects were found last spring in the St. Anthony Park neighborhood. Ash borers will likely spread to many of Minnesota's estimated 940 million ash trees.

Ash trees make up about 30% of Saint Paul's tree canopy, with more than 30,000 of them just on boulevards. Last year, 83 diseased trees were found and removed in St. Paul and Falcon Heights.

The city is distributing pamphlets explaining the tree-removal process to affected area residents.

Penfield in Saint Paul Back on the Table

Earlier this year in July, I wrote a post about how due to a decline the condo market, the Pennfield condominiums expected to be developed at 100 E. 11th Street had been canceled.  Now, new plans for the Pennfield site in Saint Paul have been given preliminary approval by the city. Instead of a $131 million dollar, 313-unit condo tower, it will now be an $88 million mixed-use project that includes 208 upscale apartments, a 170-room hotel, and a ’s full-service supermarket.

Construction is slated to begin in 2009, with the store to be completed by late 2010 and that the hotel and apartments to be finished in late 2011.  The ’s supermarket is of particular importance to the downtown neighborhood.  Once completed, the 30,000-square-foot store would be the only full-service supermarket in the downtown area.

The design details are still being determined, as the developers want to get input from neighborhood organizations and residents.  The one- and two- bedroom apartments will range from 694 square feet to over 1,148 square feet. The hotel and apartments will likely be in two separate buildings. The Hyatt Place Select Service hotel will be the first full-service hotel to be built in downtown in 20 years.

Developers expect the project to tap the growing population of Downtown St. Paul.  Though residents there number less than half the population...

Cleaning Up Saint Paul, One Site at a Time

A blighted area at the corner of Robert and Cesar Chavez Streets, one of the busiest intersections on 's , could be getting a major overhaul.  A $3.4 million project to tear down the decrepit Riverview Commercial Club building and replacing it with local restaurant Holy Land Middle Eastern Restaurant and Deli and a grocery store chain may become a reality.  It’s really up to the economy.

The old three-story Commercial Club building, which has been a ballroom, a bowling alley, even an Elks Club in its history, has sat vacant for more than a decade.  In a serious state of disrepair, it is believed the structure is beyond repair.  Fixing the corner could really reenergize the neighborhood and pay homage to the neighborhood's Middle Eastern tradition.

Plans call for the building to be razed and a one-story, 10,000-square-foot building and 50 space parking lot to be put in its place. would be the sole tenant of the building and is expected to bring at least 20 new jobs.  The nonprofit Riverview Economic Development Association, or REDA, is the lead developer on the project.

There have been many ideas batted around to fix up the site over the years.  None have worked out for one reason or another.   This time, REDA has joined with Wellington Management, a longtime development company, and is confident it can get the job done.

Construction on the Saint Paul real estate could begin after winter.  However, Holy Land has just...