Some residents of awoke to explosions at 7:30 AM on Saturday morning.  More yet awoke to the sound of the power plant’s 570-foot-tall smokestack crashing to the ground.  Its descent rattled windows, set off car alarms, and thrilled thousands of onlookers that came to witness the end of an era. 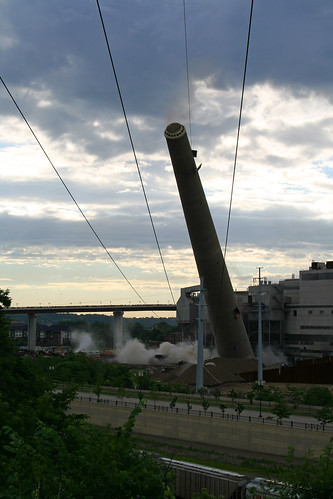 Built in 1923 and formerly 's tallest building, it was considered a historical structure by some and an eyesore by others. Though it was plain and homely-looking, the old stack was a symbol of home to many residents on both the and the West Side of St. Paul.  It’s no wonder, as the smoke stack has stood between these neighborhoods for over 80 years. 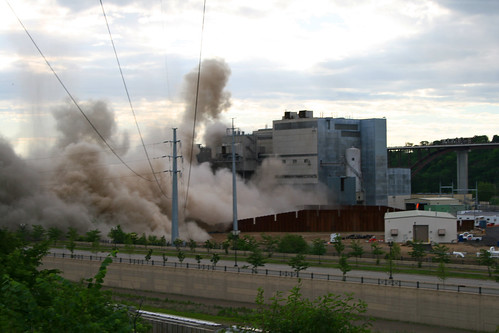 As stated previously in this blog, the demolition came as part of a $380 million conversion from a coal to natural gas burning plant by Xcel Energy at the location. The new natural gas facility, which came online in May, has twice the capacity of the old one and with far less emissions of greenhouse gases. Additionally, both the mountains of coal along the river and the resulting coal dust that used to blow around the area are long gone.

Over the next two years, the rest of the old coal-burning plant will be razed and restored.  After work on the 50-acre site is completed, the City of is likely to have a new 20- to 40-acre park on the river.

It took 202 pounds of explosives to bring down the smokestack.  It took 16 seconds for the stack to fall.  The change to ’s skyline will last forever.

Photos used with permission from "The Joy of the Mundane"